Let me start off by clarifying that when I say cry it out, I mean letting the baby try to calm himself for a few moments before going in or back in. I DO NOT mean letting him cry it out on his own for hours. I try to stay out of the fray when it comes to hot button parenting issues and have an “each to their own” mindset. However, I simply can’t agree that it’s ok to let a baby scream for hours. Not in my opinion.

Adam and I have been facing a bit of a crossroads in our home for the last few weeks. As Colton gets older, we have to decide when to start encouraging his self soothing. And when it’s appropriate to let him cry it out a bit.

Right now, for pretty much both naps and each bedtime at night, I rock him him to sleep. Either in the rocking chair, or walking around his room, he falls asleep nestled under my chin while I hum lullabies. However, with Adam on paternity leave, it is a different story Monday through Friday during the day. He cuddles with Colton for a few moments before each nap, then lays him down in his crib, tells him he loves him and leaves the room. He tells me that Cole will cry for 2 to 3 minutes and then fall asleep.

Our little man is 9 1/2 months old. I know for certain that Lilly was well past being rocked to sleep by now. I know that when she was a baby, between 5 to 6 months old, I had chosen to let her self soothe. She might have fussed a little bit before each nap, but she never really cried much at all. By seven months old I could put her down in her crib and she would babble herself to sleep just fine. She was a great sleeper and very independant. Right from day one.

Colton has been a very different baby altogether. He simply doesn’t self soothe. At all. It could have something to do with the fact that he was very colicky until 6 months old. If we didn’t comfort him right away, he would scream for hours. We learned to hop into action the second he started to fuss. It was like diffusing a ticking bomb several times a day.

The upside to colic? I have an incredibly snuggly baby boy. We have spent countless hours attached and it still shows now. He just loves to cuddle with me, sit on me, sleep on me. And I find myself wondering, what is so wrong with that? 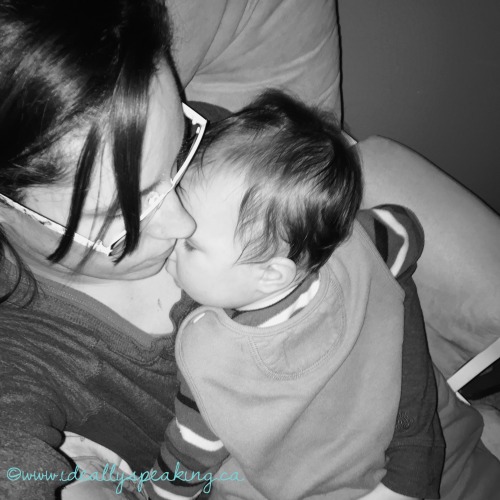 Here is my theory on it all. Contrary to what people think, babies don’t want for much. They may be incredibly dependant tiny humans, but 95% of it is need based. Cole does often want the TV remote. To chew on it, of course. He doesn’t like it when we deny him that want. But other than that, there is very little he actually wants rather than needs.

Right now, he just wants me.

And sometimes Daddy. But let’s be honest. I have a mama’s boy on my hands. I thought that would change a bit when Adam took over paternity leave, but it didn’t really. He quite literally squeals with delight when I come home from work. There is no better sound.

At the tender age of 9.5 months, he already shows so much affection. He will army crawl across the floor just to pull himself up on me and bury his head under my chin or give me kisses. When he’s drinking a bottle, he rubs my hands or touches my face (although he also sometimes pulls my hair…). At the end of the day, after the PJs are on and the books have been read, he locks his head under my chin and wraps his tiny arms around my sides. Every once in a while he will pull his head up to stare at me or plant a sloppy kiss on my face.

He wants me, with all the snuggles and rocking he can get. Many would argue that at this age, this is both a want and a need.

I have struggled internally with the decision to continue rocking him to sleep. I worry that I am holding him back and stifling his independence if I wait too long. I worry that if I don’t stop soon, I’ll wind up with a 3 year old that takes an hour to go to bed.

I know that there is a crap ton of science and even more opinions on either side of this debate. There are medical papers, books, articles and blogs on the matter. What is lacking is any clear indication of a right way or wrong way.

As with all parenting tidbits I share on here, I believe that there will never be a right or wrong way. Parenting doesn’t come with a handbook. No one has the answers, despite what they think. We’re giving the gift of instincts as parents and we have to use them to determine what works best for each child.

I have had one child that we let fuss/cry it out and it worked very quickly. She is strong and independant and yet also very loving and cuddly. We now have a second child who is far more determined than his sister ever was. He craves being held more and at the end of the day, I am ok with that for a little bit longer.

Do I know exactly when we should stop rocking him to sleep or picking him up each time he cries? No. But I do know that it is not now. He just wants me. He can cry it out later.

Ideally speaking, Cole will start to gain more independence naturally the way Lilly did and he will never really have to cry it out at all.

Surviving colic and regaining my sanity.

Paying my dues…the curse of the perfect sleeper!

Leave a Reply to It's not your brothers fault. - Ideally speaking... Cancel reply