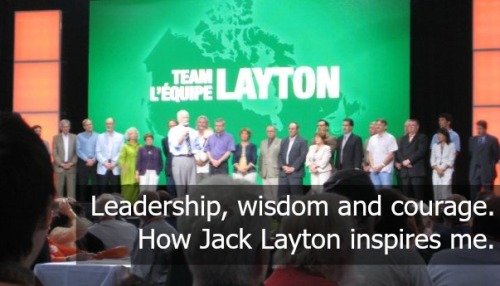 Warning, this has taken me over a week to finish, and it’s a tad lengthy. I’d say I’m sorry, but I’d be lying. In light of everything, I felt inspired to write this, no matter how long it wound up being. When writing about a personal hero, it has to come from the heart, and I feel this does just that.

I have had a strong interest in politics from an unnerving age. I was always one of those abnormal children who loved watching the news. I don’t think I got a grasp on it, however until I was much older. I can remember being 16 and begging my mom to let me put an NDP sign on the front lawn…and so it began.

I got involved with the Simcoe North NDP in a roundabout way. I had taken a few years off from any political involvement and found myself longing to get back in at the start of the 2008 Federal Election. I was questioning how I felt on a few key topics, so I was making my way to a few different events for each party, asking questions and gaining a better understanding. I walked into the NDP nomination meeting to just talk about a few things…and walked out a campaign volunteer.

We ran a strong campaign, and I met a lot of really great people. I knew I was hooked again and wanted to make a bigger contribution. I mentioned I would maybe want to consider a position on the Board of Executives for the riding….so they made me Federal President. No big deal.

I know, I know, it was a HUGE step up. I was terrified worried overwhelmed excited by the opportunity ahead of me! Truth be told, I know the reasoning. I am a young, energetic female who is passionate about many topics and learns quickly. I’m the type of ‘fresh blood’ that riding associations look to plant seeds with. The first order of business was to ship me off to Federal Convention. I already had plans to go down east for a family visit, so the 2009 Halifax Convention was a perfect fit. If you’re involved in politics at all, make a point to try and attend at least one convention. It is a truly amazing experience.

Naturally, the highlight of the convention was meeting Jack. My hubby and I had purchased tickets to one of the dinners, where I knew I would have the opportunity to get in a few words with the party leader. Walking up to say hi felt kind of like how it might when you meet a rock star, because honestly, especially when you’re in the middle of the convention, that’s basically what Jack is. He’s our rock star.

He greets everyone with an incredibly warm smile, a firm handshake, and a direct look that tells you he is truly intent on hearing what you have to say. I started off by telling him who I was, that I was there as a Youth Delegate (just barely), but yet I was still one of his newest Federal Presidents. I definitely admitted that I was a little nervous about taking on the role and concerned about doing a good job. He very quickly assured me that all the resources are there for me to succeed and that the National Office is always available. He then handed me his personal business card and told me not to hesitate at all if I felt I needed anything. 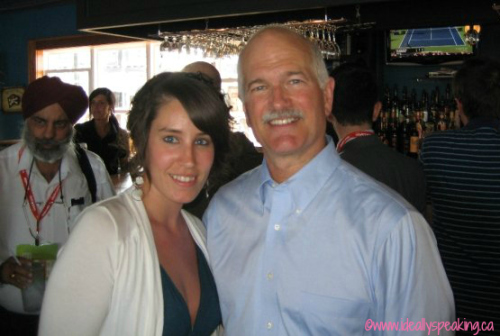 We carried on a great 10-minute conversation about running a campaign using social media and new technologies. We also talked about why I believe in the NDP and how the party is fully engaging a younger demographic and making them feel motivated.

I’m sure I rambled on about how I am a green freak (and embarrassingly showed him my recycling tattoo on my wrist), but that I am also a wife of an unionized worker and would one day raise a family. I mentioned that I care about the environment, really but I also care about education, equality for women, health care and economic stability for ALL classes of society, among so much more. I know I can talk a lot – as you can tell, if you’ve made it this far – but not once did I feel like he was rushing me at all.  He took the time for me, and it showed. It was truly an incredible experience.

Over the past two years I, like many other NDPers, have interacted with Jack through emails and town hall phone calls. In spite of everything he has had going on personally, he has taken the time to ensure that members of his party, as well as the rest of the country, know that he is here to listen to what they have to say. He displays an incredible amount of courage as he continues to fight for what he feels Canadians deserve. This level of determination and perseverance is an asset in a politician and has even more added value in one as passionate and down to earth as Jack.

It is because of these qualities that I look up to Jack Layton as the type of politician I aspire to be. Ideally speaking, all politicians would be this inspiring.

The loss of a leader.