I had originally posted this article on an incredible site called Violence Unsilenced. It was a safe space for victims of abuse and sexual assault to share their voice. The site allowed victims to share their personal stories, anonymously or not, so that those stories could be used in the fight for the rights of victims and to raise awareness to the pain being inflicted every day. 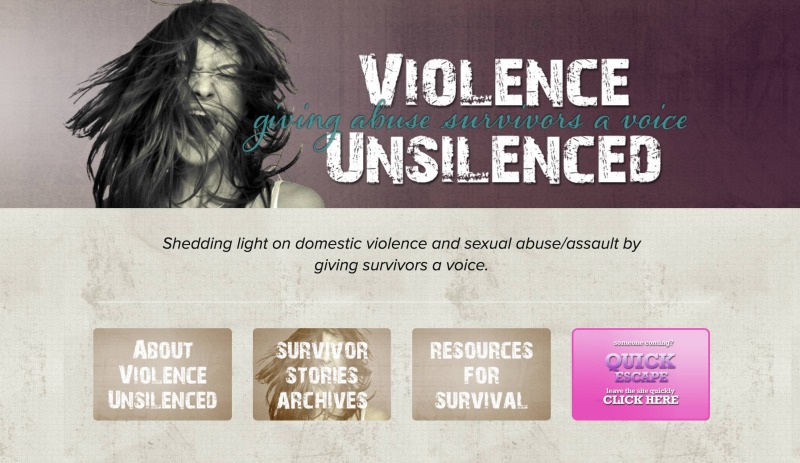 Sadly, the site is no longer running. I had shared my story on there, openly, in a way that was more graphic than I ever had been on here. My hands were literally shaking when I hit the send button to submit my article and I cried when they called to say they wanted to run it the next day.

I had called my mom and dad to warn them it would be going up. I prepared myself for the anxiety that came with posting such great detail of my assault. However, once it was live, I felt empowered and strong.

With the site being down., I wanted to run my story here and now, on my own blog. I want to repost it because I think it is important to be outspoken and to shed light on a disgusting and traumatizing epidemic.

And so, here one part of my story:

Once upon a time there was an idealistic little girl. Her parents had separated when she was 6 years old and her mother moved on with a new man. This man did everything he could to ruin the idealisms of this little girl and her two brothers for many years. He used his words, his fists, his strength & his authority to try to tear them down. This little girl was me and this one piece to my story.

Years passed and I started to change into an idealistic young lady. One fateful day when I was 12 years old, I came home to find that the house was empty for my stepfather and me.

I had been in the house alone with him many times before, but lately, I was growing more and more uncomfortable. It had started a few months prior, innocently enough. He would ask me to sit on the couch and watch TV with him.

He gradually began to ask me to lie down and cuddle with him. Caught somewhere between a little girl wanting to feel close to a father figure, and a young woman terrified to anger an abusive man, I obliged.

However, on this particular day, our cuddling took a turn that I would never be able to erase or brush off.

“Come lay with me,” he said. I began to walk over, quietly saying “okay.”

As I started to lie down in my usual spot beside him, he grabbed hold of my hips and lifted me onto his body. He held his arms tightly around my wrists with his hands resting on my lower back. My legs were left to dangle between his legs and my belly rested on his.

I could feel his arousal hard against my leg, although I barely registered what that meant at the time. He began rubbing my back and stared at me.

“Do you love me?” he asked. “Yes, of course,” I said. As mean, abusive and hurtful as he could be, he had been a father figure in my life for nearly 6 years and we had shared some happy memories as a family. He seemed pleased with my answer and rested for a moment.

Taking a deep breath and looking noticeably nervous, he looked up at me again and said, “Kiss me.” I leaned down and gave him a quick kiss, no different than I had done many nights at bedtime for many years.

He laughed lightly and said, “no, kiss me like you kiss your boyfriends.”

Not fully understanding, I leaned down and kissed him exactly as I had before and said, ‘that is how I kiss my boyfriends.’

This was true, since I had only had one or two boyfriends at this point and had only made it to holding hands and chicken peck kisses.

When he realized that I wouldn’t or couldn’t give him the kiss he wanted, he looked upset. Sensing and fearing a shift in his gentle approach, I quickly told him I had a lot of homework to finish and that I needed to get started.

He hugged me to him again, then pulled back and asked, “Do you still love me?” I said yes again. I didn’t want to anger him.

This level of confused intimacy, with gentle kisses and caressing, carried on for 3 years before I had him arrested for physical abuse. I didn’t told the police at the time about the sexual assault. It would take me 2 more years before I ever shared it with a few close friends and I was nearly 20 years old before sharing the details with my mother, father, and brothers, at the suggestion of a therapist.

Although the acts never escalated too much more than his arousal and some physical movement with clothes on, his kisses became more determined and he would hold me tighter against him. As I grew older, I became more aware of the inappropriate nature of these moments. I grew increasingly distant while it would take place, abandoning my body to fend for itself as my soul went somewhere better.

Looking back, I often wonder what he was taking from me saying that I still loved him. I still wonder if he would have pushed the sexual acts further if I had fought him off with more force and aggression. The fear of what could have happened & the memories of what did, cast a small shadow in my resilient idealistic nature.

At age 25, 10 years after having him arrested, I did finally give a statement to the police, when I heard his new girlfriend had just had another baby. It was too late for charges, but my statement is now on record, incase I ever need to be called in as a witness for someone else.

I haven’t spoken more than a dozen words to him since he was arrested. I wish I were brave enough to confront him. To tell him that he didn’t ruin my life. He overshadowed many good memories for nearly 10 years of my childhood, but I get the rest. I have a wonderful life and he is just a mean old bastard living in the same small town.

I win. I am happy. I am loved. I am endlessly idealistic.

Note to my future self. The mother of a teenage girl.