A young 22 year old women walks into a trendy looking software company and hands her resume to the President, who is only in her early 30s herself. Looking around the office, the 22 year old quickly picks up the fast-paced, yet fun environment of the company and instantly knows she wants to work here.

She nervously follows the President into the boardroom for her interview. The job is Marketing Coordinator and is exactly what the young women wants to do. She knows she lacks experience and knowledge of the industry, but she has to at least try. A few minutes in she realizes how down-to-earth the President is and relaxes a little bit.

President – Do you know what PPC is?

22 year old – Yes, because I Googled it before coming here. (she says with a smirk)

The 22 year old goes on to explain that unfortunately the post-secondary education is still behind in terms of teaching digital marketing and advertising, but that she is a fast learn and can adapt. The interview goes great and she is soon asked back to meet with the President again as well as the VP of Marketing and to bring her portfolio. That interview also goes well. She is called back once more for a final discussion with the President. She is honest and lets the 22 year old know that it has come down to her and one other candidate.

President – She has a lot more experience than you do, but you would be cheaper. (she says with a laugh)

A week or so later the President gives her call to let her know that they have chosen the other candidate. However, she would like the 22 year old to keep an eye on their careers page over the next few months.

President – We’ll be posting jobs in several departments over the next little while and I would really like to have you as part of the team and get you in here.

A few months later, the 22 year old sees an entry position on the sales team and sends the President an email. She hears back quickly and basically gets a “great, you start Monday” type of response.

She goes onto work at the company for nearly 10 months before the weight of acquisition sets in and the US based parent company makes some changes. However, understanding that this is just business, she leaves on very good terms and stays friends with everyone.

The now 23 year old picks up a job the next day at a new start up direct selling company, as their Marketing Manager. She spends the next 5 years working her butt off to grow a new company, but sadly the company doesn’t make it. The day the news breaks, she calls her old boss, now the CEO of a new software company.

CEO – Come on in tomorrow and we’ll chat.

Less than a month later the 28 year old started at the new software company, working with a large chunk of the original team. It felt half like deja vu and half like she had never left. She was working as one of the members of the services team, doing digital marketing for end clients.

Fast forward over 2 and a half years and the Senior Marketing Manager position for the company has opened up. One specific Friday afternoon, the COO of the company sits her down and lets her know the position is hers. She spends the next 20 minutes a bit in shock before heading out for the weekend. She gets into her car and literally shouts “whooo hooo” at the top of her lungs.

It took nearly a decade, but she finally landed her dream job. 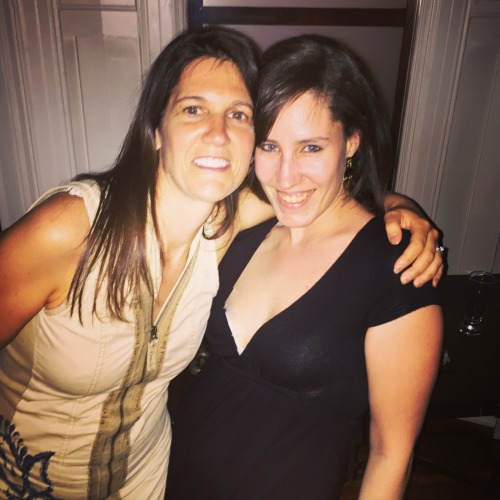 My awesome boss lady and I. My mentor & someone I look up to so much. A bit embarrassing knowing she might read this, but it’s nothing I haven’t drunkenly said to her face ;)

I have learned many, many lessons in my short 31 years on this planet. One of the biggest is that you never burn a bridge and you never give up on going for what you want in life.

The last 4 months have been crazy. I have pulled longer hours, been on two business trips, and answered emails at 1 am. I have an incredibly messy house and a severely neglected blog

But I have loved every minute. I am the Senior Marketing Manager for gShift, a fast growing SEO software company in the digital marketing space. There is so much potential in this position if I prove I want it and I am up for it. I do and I am. I feel challenged and excited every day and can’t wait to see how this chapter of my life plays out.

Ideally speaking, I am well on my way to reaching a position in my beloved marketing industry that begins with a letter or two