It has been ages – and I mean ages – since I posted one of these. Lilly grew into a preschooler and I had always meant for the segment to grow with her…

– Read all Talking With My Toddler posts here. –

But right around that time, we went from one kid to two and I quickly understood why moms lower their output expectations once they are outnumbered.

Here’s the thing though. I now feel terrible I haven’t blogged as much of Cole’s life as I did Lilly’s. I know it’s normal. Kind of like completing a baby book, or getting the nursery decorated before their first birthday. The odds of completion drastically decrease with each kid.

Well, it’s time I give this little guy his portion of the spotlight!

Cole had initially been slower to talk, but we have seen huge improvement in the last 8 months. He has always been very talkative and clearly had a great vocabulary, but no one could understand him except me. He officially started speech therapy last summer, which we opted to move forward with, since he still struggles with pronunciation. Plus, everyone told me it’s better to be proactive. I’d rather be working ahead on developing his speech now, than risk him struggling when he starts school.

Fast forward to now and he is mostly understood by many people around him. He occasionally still needs his Cole-to-English translator (me), but he can hold his own quite well. It’s been incredible to see his funny personality come alive.

I foresee many, many humorous additions in this round of Talking With My Toddler. For starters, I think he works the word penis into at least one conversation per day. More on that in the future

For this edition, I thought I would start off sweet. For out of all the things Cole has learned to say, this one is the most important. Last week, he and I had a little conversation in the car on our way back from speech therapy. 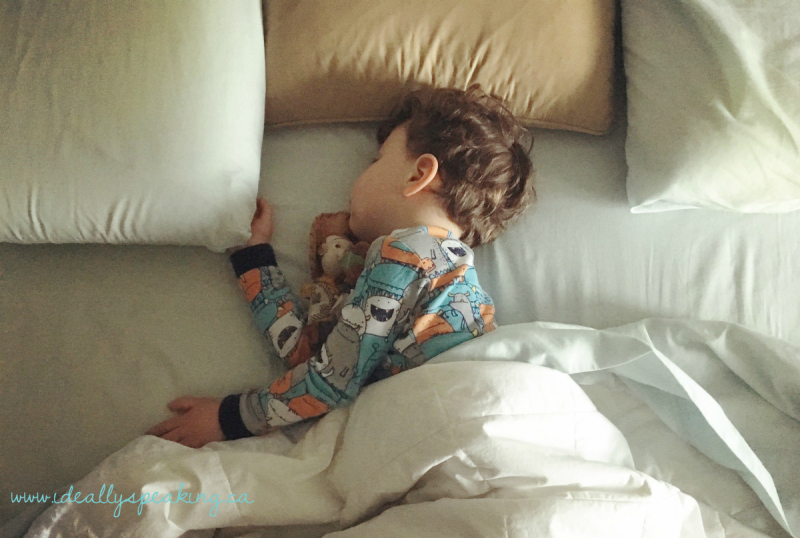 I mean, it is really hard to kick him out of bed when he’s this damn cute.

Prior info needed – Since December, I can almost count on one hand the number of times he has slept in his own bed all night. We thought it started as teething, then it was a cold, then more teeth and now? Well, who the hell knows. Either way, he starts off in his bed and winds up in ours hours later. So I decided to ask him why.

Me: “Hey, listen bubba, I wanted to ask you a question.”

Me: “Yes, a question. Where are you supposed to sleep at night?”

Me: “That’s right. In your big boy bed. So bub, why have you been crawling into bed with mom and dad?”

He said this last line with such a sweet, sincere and almost sad tone. Tears immediately hit my eyes and I had to hold them back so I didn’t really upset him. Cole has said “I love you” in response to having it said to him, but this was the very first time he had said it on his own initiative and he used the right context.

Cole: “I wuv you too much!” (his typical excited response to that statement)

With this conversation, he effectively melted away whatever parenting concerns I had about him crawling into bed with us. Once I repeated the chat to Adam, it did the same for him. I know the issue of independence and co sleeping can divide parents into one of two camps, but frankly, I don’t care. At this point, we are neither for or against it. Our toddler wants to cuddle for the last half of the night because he loves us. That’s all the information we need.

That being said, ideally speaking, he will grow out of his before he’s 18, or it might be a bit awkward.

Talking With My Toddler #16: Buying her own house

Talking With My Toddler #13: The difference between boys and girls.